The vzaar analytics system is designed to offer extremely accurate play-counts, which update quickly. The system is based around JavaScript events, which are fired within the vzaar iframe.

These events are fired whenever there is a video impression (a video is loaded but not necessarily played) or played (whether by the user initiating playback or autoplay).

You can find  a summary of all your analytics here or by clicking on “Analytics”, on the green bar, from any page in your vzaar account.
This will take you to the following page: 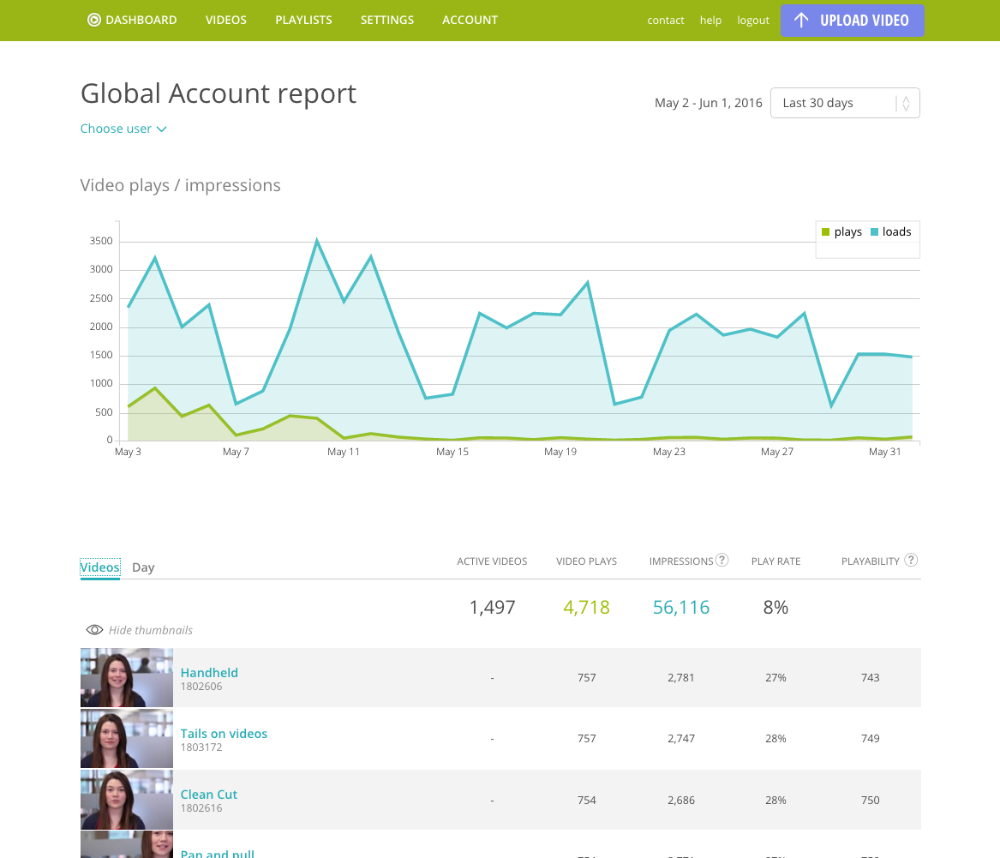 It’s designed to give you an at a glance overview of everything going on in your account.
The graph on this page tracks your views and impressions over the time (see the What’s Counted section for more info). You can change the time period it displays in the top, right-hand corner of the page.
Below this you’ll find a table with a more granular breakdown of the current numbers. It show the number of plays and impressions for each video, along with the percentage difference between the two, and a vzaar Playability Index.

What do we track?

There are two cases when a play is counted:
These are the only two things which will cause a play to be counted.
In any other scenario a play will not be recorded. So, for instance, if a video is looping (or if the ‘replay’ button is pressed) we will not record multiple plays. Likewise, we will not record plays for downloads or other interactions. The intention here is to keep play counts as transparent as possible.
We also record another metric called ‘impressions’. These represent every time the vzaar video player is loaded onto a page. So, whenever someone requests a web page with a video embedded upon it, that’s one impression counted for the associated video.
We usually expect your impression count to be higher than your play count. It allows you to compare how many people are seeing your video on a page, against the number who are actually watching it.

The problem
When comparing the number of times a video is loaded with the number of plays, we tend to find a sense of perspective helps.
Simple ways of comparing the two tend to prove problematic, when subjected to more sustained analysis. For instance, if you work out the percentage difference between the two, you encounter the following issue:
The percentage differences in this simple ranking system tell you that video A is performing better. However, it’s plain to see that video B is seeing way more traffic.
The data itself requires further analysis to really understand. In most cases, the conclusion you’d reach is that the percentages are pretty misleading. You certainly can’t just glance at them, to see how a video’s doing.
The solution
So how does the vzaar Playability Index address this issue? Well, sit tight, because this is going to get a little mathsy.
The core problem is that, in the example above, scale isn’t factored in. However, when looking at playcounts, scale is likely to be your primary concern. You want to know which video is receiving the most interest.
For your percentages to be meaningful, you’ll need some degree of weighting to take scale into account.
Naturally, there are hundreds of ways you could do this. After a lot of research we settled on the lower bound of a Wilson score confidence interval for a Bernoulli parameter. For the mathematicians out there, that looks like this:

“Here p̂ is the observed fraction of plays, zα/2 is the (1-α/2) quantile of the standard normal distribution, and n is the total number of impressions.” - source: Evan Miller, Feb. 2009 (adapted for context)
You can find a more complete explanation, along with our source for this summary, over  here at Evan Miller’s blog. If you get really into it, you may also want to check out  this Wikipedia article on binomial proportion confidence intervals (I mean if you get reeeaaaallly into it...)
Most importantly, here’s what the vzaar Playability Index gives you. The percentage difference, between a video’s impressions and play count, is weighted against the number of impressions it’s received in total. This makes the resultant number ideal for ranking your videos’ performance and getting an instant sense of how they’re doing.

You can download your analytics from month to month in the form of a comma separated text file in your dashboard:  http://app.vzaar.com/analytics/report. The report can then be imported into Excel or other application of your choice for further analysis:

The column headings are mostly self-explanatory but the following may be of interest.

bandwidth_bytes - The total amount of data we've delivered for this video during the month. Note that this figure may be higher than you expect when simply multiplying plays by encoded file size:

deleted - We keep data on your videos even after they are deleted so they are included in the report. You may care to simply sort the sheet data by that column and delete all rows with "Deleted" in the `deleted` column.

CFRs - these are "CDN file requests". Simply put, we used to measure a play anytime there was a request to the CDN for the underlying video file. But, we found that many modern mobile clients might make multiple requests for the same video file for a single user during a single view. For that reason, we recently completely re-engineered our approach to gathering analytics to produce numbers which more accurately mapped on to end-user viewer behavior. It's a complex and subtle issue and you can read more background here: Dev Chat: The Next Generation Of Video Analytics

We give you the option to include some extra data in your downloadable report:

As stated above, impressions and plays are only captured when our player is embedded using the vzaar iframe. The last three options here allow you to see video activity which occurs outside the iframe:

Include Non-iframe Embed Video Requests: counts videos accessed via the /video URL. This would be typical if you're using a third-party player or you're playing back video on a mobile device using native media classes.

Include Podcast Play Counts: counts plays which result from use of the vzaar Podcast feature.