What is iOS Optimised Playback?
iOS Optimised Playback (also known as HTTP Live Streaming by Apple or iOS Streams) encodes videos at multiple different rates so that the end device can select the appropriate stream depending on the strength of the mobile connection.
There are 5 different streams in total, and you will gain access to a number of these streams depending on which level of package you're subscribing to. Please note, iOS streams are not required for iOS playback. If your account does not include the streams, your videos will simply play on the device at its original size.

The number of streams depends on your specific subscription. Below is a table documenting the varying qualities of each stream: 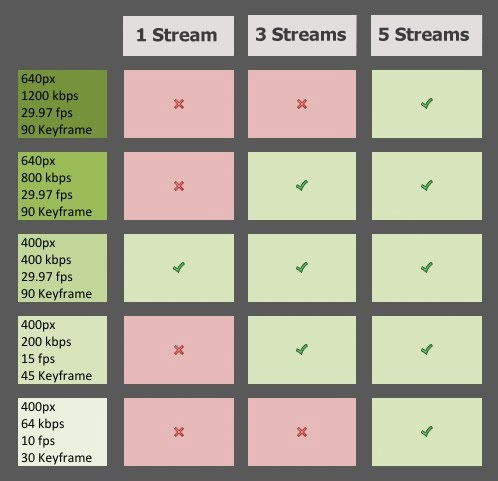 Audio is encoded at 40Kbps for all streams.

If you would prefer to have the video playback at the quality at which you have uploaded it, regardless of the mobile connection, you can disable the iOS streams via your encoding settings.

Videos that are encoded with this feature enabled, will automatically be picked up and served to iOS enabled devices (iPhone, iPad, iPod Touch and new Apple TV)

Note: iOS Streams are added during the encoding process so disabling the feature will not disables the Streams already attached to your existing videos. Individual videos need to be re-uploaded and re-encoded with Streams disabled to remove the Streams. If you have the need to disable streams from videos in bulk, contact Support and we can help.